How We Made Time to Vote

As a marketing localization agency, our people are naturally globally informed and big-picture thinkers – that’s just an essential part of who we are and why we do what we do. Because voting is a civic responsibility and a precious democratic right, we take that seriously as part of our company culture and our commitment to business as a force for good.

As a certified B Corp, we already encourage our people to influence positive change in our communities and to be engaged in the wider world through volunteering, environmental awareness/action, and by keeping up with world events. But that’s not enough. We want our people to be fully engaged in our local and global communities. And involved citizenship is about supporting our democracy and using our voices through the voting process.

With voter turnout nationwide in the 2014 midterm election at only 37% and just 55% in the 2016 presidential election, the US trails most developed countries. And since almost 50% of our people are in the 18-29 age bracket (the age range least likely to vote), we felt all the more responsible for providing the help and support they needed to get out to the polls.

So, ahead of the 2018 midterm elections, we made a commitment to join over 400 companies in the Make Time to Vote campaign, and we set ourselves the goal of achieving 100% Wordbank voter turnout.

WHAT WE DID TO ENCOURAGE OUR PEOPLE TO VOTE

When we first heard about the Make Time To Vote campaign via Patagonia’s blog and our connection to the B Corp community, joining up was a way to clearly communicate to our people how serious we are about supporting our democratic process. We did our research and found out what other companies were doing, from providing time off and providing unbiased ballot information, to simple education on voter registration and the election process.

This enabled us to form a clear plan for communicating with our people about our commitment to help and providing a framework to do that. And because we did that a month ahead of the midterms, it became a natural part of our company conversation and something our people felt passionate about. We encouraged them to share their pride in voting both internally and via social media channels.

We know one of the biggest barriers to voting is having the time to do it. While we were supporting our people, we realized how difficult the voter registration and voting process can be. For example, registration can be complicated, and while having a range of ways to vote is arguably a great thing, that can also create confusion for newer voters. Aside from that, the unusually high number of Colorado ballot initiatives was overwhelming, even to seasoned voters!

Here are some of the things we offered our people to help them get out and vote: 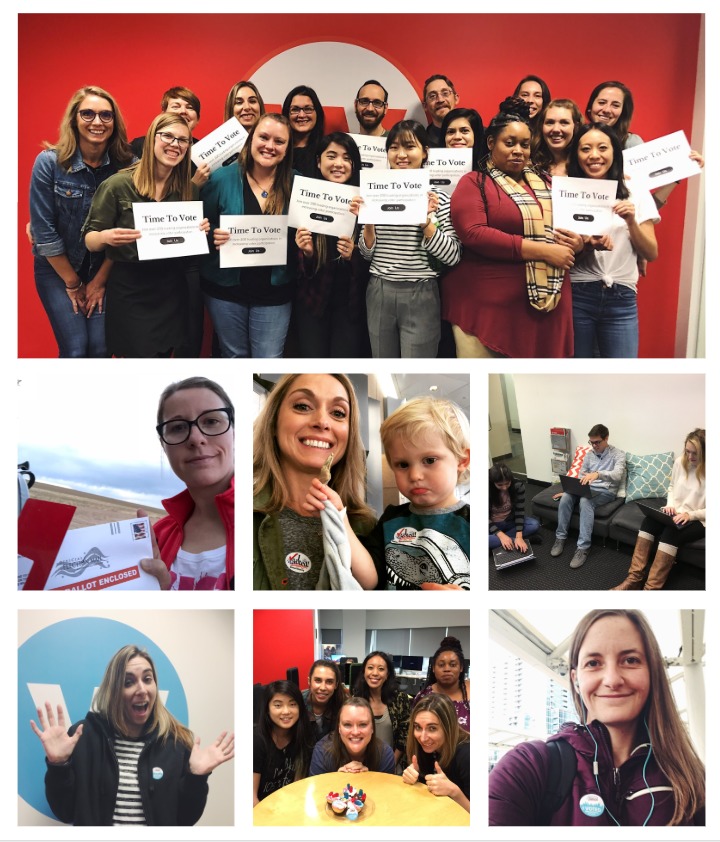 THE RESULTS & OUR KEY TAKEAWAYS

In a nutshell, we gave our people the time and support they needed to make voting in this year’s elections a priority. We were aiming for 100% voter turnout, and we did it!

Here’s what we found most impacted our people to get out and vote.

Colorado is ranked #2 in ease of voting access nationwide. The state automatically sends mail ballots to everyone, allows voter registration on Election Day, and provides early voting options. While this definitely made it easier to reach our target, we still ran into some issues during the process.

Two of our people had recently moved to Colorado and hadn’t yet updated their driver’s licenses. As such, they weren’t sure if they could still register to vote. It took a lot of digging to find the official form to register with, but then it was unclear where to send the form. We were glad to offer this assistance because difficulty in the registration process will often keep people from voting.

One positive takeaway for us was that this campaign became a way to help our remote people participate and feel more connected to the company. One of our remote people works part time while taking care of her baby, so finding time to research issues and to look up the deadlines was overwhelming for her. The information we provided was helpful, it saved her time and inspired her to vote. She also appreciated that the campaign was a shared goal she could be included in, and the social media campaigns offered her another way to connect.

Many of us were inspired to vote because four of our Denver people are permanent US residents, but not US citizens and therefore can’t vote. These people are from the UK, France, Germany and South Korea, and each have been in the US for several years. One of those permanent residents attempted to gain citizenship last year, but the current administration rejected the application.

Apathy and feeling as though votes don’t matter often keep people from voting. But these Wordbank stories highlighted what a privilege it really is. Many of our people realized the importance of voicing their values for themselves and their communities through voting and how fortunate we are to have that democratic right.

While we are thrilled that 100% of Wordbankers made the time to vote, we recognize we need to do better as a nation. Our country needs to make voting more accessible for everyone, through national mail-in ballot systems, automatic voter registration (like in Oregon) and by making Election Day a national holiday. We will join the many voices advocating for this to truly bring change to the voting process.

And in the meantime, we will continue to vote by joining the B Corp community’s Vote Every Day public awareness campaign recently launched by B Lab. This campaign is a reminder that we all vote every day with what we purchase, where we work and who we choose to do business with. The best way for our voices to be heard beyond Election Day is to be intentional about who we spend our money with and how we approach personal and professional decisions in our everyday lives.

We’ll be highlighting more of how we’re getting involved in the Vote Every Day campaign, so stay tuned!