The South Korea eCommerce market is the sixth biggest in the world. But the eCommerce landscape is much more complex than in North America or Europe. And a one-size-fits-all approach to the market will spell doom for online retailers.

South Koreans are among the most connected consumers in the world. 95% own a smartphone, and many have what South Koreans call a “second phone.” An extra smartphone used exclusively for entertainment and gaming.

With plentiful wifi and an abundance of excellent in-market retailers, South Koreans’ expectations from eCommerce sites are high. They’re less likely to trust international brands. And earning that trust isn’t straightforward – or easy.

Here’s what you need to know to survive and thrive in the South Korea eCommerce market.

The average daily commute for South Koreans is long: 96 minutes. So it’s not surprising they use their smartphones to pass the time – and much of that time is spent shopping online. In fact, boredom is a key driver in South Koreans’ purchasing behavior.

South Korea is the most digitally connected country in the world (more so even than Singapore and Japan). Thanks to a huge push to build infrastructure to support 5G ahead of the 2018 Winter Olympics in Pyeongchang, high-speed connectivity is available pretty much everywhere in the country. In 2019, South Korea was the first country to launch the 5G mobile network. It’s even available on the subway system and in most public spaces.

As with many other markets, the COVID-19 pandemic has dramatically increased South Korea eCommerce sales – and it’s likely that volume will continue to increase. Online shopping is especially popular with younger consumers: over 94% of South Koreans aged 20-39 make online purchases.

COVID-19 has also given rise to the “untact” economy in South Korea. Combining “un” and “contact,” it refers to the non-face-to-face social and economic activities that have increased during the pandemic. The term is used to describe “connecting with consumers intimately but safely.”

Entering the South Korea eCommerce market is difficult but well worth the effort. It’s projected to reach $156 billion by 2028. South Korean consumers are less trusting of international brands, but are receptive to new things and not big on brand loyalty. So if you can navigate the eCommerce market effectively, the potential payoff could be huge.

To succeed, you’ll need to understand the South Korea eCommerce landscape. As a very technologically savvy culture, South Koreans have their own platforms, and each plays a role in the purchasing decision.

Google: Brand research and consideration. South Koreans turn to Google to confirm what they’ve read on Naver and decide if they want to purchase the product.

KakaoTalk: Chat with friends and discuss new products. A whopping 93.1% of South Korean internet users are active on this platform.

Coupang: Shopping app. 46% of consumers use Coupang, and it has the highest reach of any eCommerce app on Android. It also has logistic centers within ten minutes of 70% of South Koreans.

THE ROLE OF NAVER IN YOUR SOUTH KOREAN STRATEGY

The first South Korean website with its own search engine, Naver (derived from “navigator”) is the preferred search platform in this market. 93% of South Koreans rank Naver as their top preference.

The difference between Naver and Google

More than 8 million people are active bloggers on Naver, and there are over 31 million total blogs. The platform offers a user-friendly interface, and its advanced algorithm displays highly relevant blog content to users. South Koreans use Naver to find inspiration, information, reviews, and entertainment. It’s free for anyone – including brands – to set up a blog on Naver.

Naver is heavily reliant on user-generated content, encouraging a more exploration-driven search experience. When a user searches a keyword, they’ll see several curated sections displayed on a single results page. Naver prioritizes its own user-generated content – including Naver Blogs, Cafes, and Knowledge iN – before other third-party content. (Even official brand webpages.)

Through Naver, users get an impression of brand or product sentiment, whether positive or negative. If their curiosity is piqued and they’re considering purchasing, they’ll then turn to Google to confirm what they’ve read on Naver. (Often by visiting a company’s website.)

To put it simply: Naver will get people interested, and they’ll use Google to decide whether they’re going to buy. So a successful South Korean digital marketing strategy will be focused on Naver and Google in driving engagement and conversions.

Why Naver is more popular than Google

As South Korea’s native search engine, users in that market know Naver inside and out. It was built to focus on local content from the outset – including Korean language and culture. So Naver offers more relevant search results.

For instance, check out the differences in search results for the same tourist attraction on Naver versus Google. Naver provides a much more rich, robust user experience: 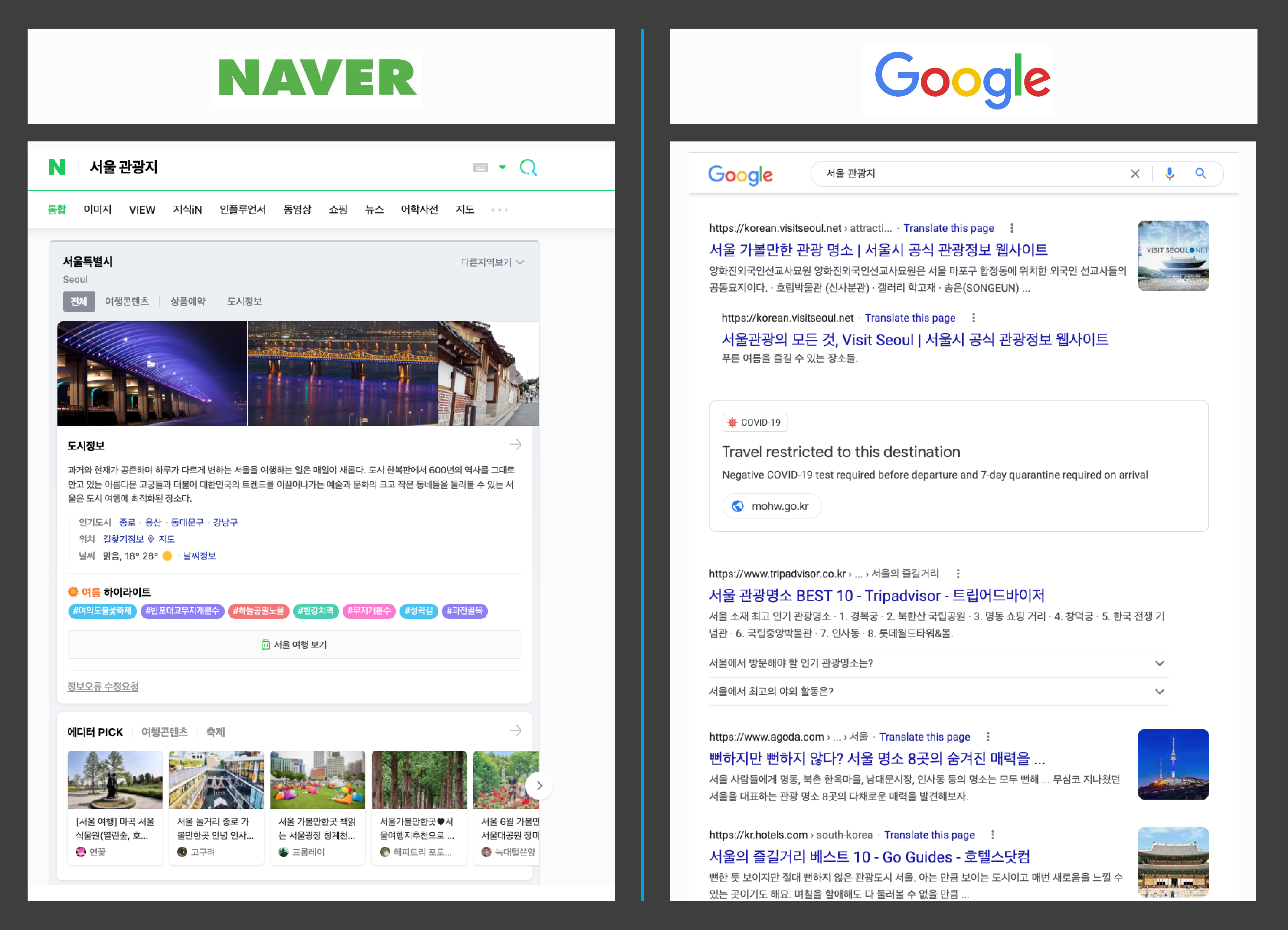 For security reasons, many pages in South Korea have also blocked Google and other global search engines from crawling their sites, limiting Google’s reach.

Naver is the go-to platform for South Koreans to search for the latest trends, user reviews, and more. A mix of search engine, social media platform, and influencer hub, Naver is the perfect place to learn about and engage with your target audience.

Many brands opt to approach Naver by only working with local influencers. But having your own blog will help you establish your brand’s unique voice and engage with your audience directly.

Similar to how you might form an SEO-driven blog strategy for Google-dominant markets, keyword research is crucial for Naver. Naver’s SEO tools include popular keywords, search volume, and blog post data. Working with a skilled in-market copywriter to leverage trending keywords and subject matter in blog content will help you build a strong community on Naver.

Engaging, relevant content is crucial. If users spend longer on your page, Naver’s algorithm will pick up on it – and will boost your visibility.

A successful South Korea eCommerce strategy requires much more than simply optimizing your website for in-market preferences. A Western-centric approach to the market will likely mean failure. But by putting high-quality, relevant in-language content at the center of your strategy – and taking the time to build a community on Naver – you’ll set your brand up for strong growth and further expansion in the market.

Special thanks to Sua Son, a South Korean Digital Marketing Strategist, for sharing on-the-ground insights on what US brands really need to know to get eCommerce in South Korea right.